“To deliver our arrows with precision from a position of safety and security, to help cultivate a thirst for excellence in all aspects of the lives of those we teach.”

Our modern culture is in desperate need of true men who can mentor the youth of this generation in a craft that demands attention to detail, patience, and discipline so that they are naturally compelled to fly straight and seek excellence with true humility in everything they do when they grow up and this nation is passed on to them.

OUR STYLE OF INSTRUCTION

“REX Defense offers thoughtful instruction, modulated in real-time to best suit the trainee’s learning style and achieve maximum absorption of the concepts being delivered.   REX Defense has an intellectually diverse crew of dynamic thinkers who communicate concepts from multiple angles to ensure the trainees truly understand key concepts.  The science is presented at multiple levels of sophistication so that all levels of trainees get the most out of their instruction.  In other words, we have the ability to think “outside the box” and our method of instruction is purposefully unique in its eloquence and spirit.  Yes, we have fun!  Why?  We punctuate the minds of our trainees with more than mere anecdotal entertainment, we initiate the chain-reaction of explosive learning by achieving critical mass in the most efficient way possible – by keeping the trainees legitimately enthused and intrigued with a craft they must fall in love with and marry if they wish to truly master.  A union with the craft of the long range rifle is only truly achieved when one is married to it – to be practiced, refined and grown naturally, without need of force to learn a standardized procedure.  To master this craft, you must become one with it on every level.    We wish to pass on this fire to our trainees, so that they can apply it without strain of thought – for all the days of their lives.”  ~ Rex Tibor

"In a complex world of gadgets, electronics, bells and whistles, it is important for the viable long range shooter to streamline his firing process in a way that is not rendered useless when the SHTF.” ~ Rex Tibor

Learning to shoot a rifle is relatively simple, but achieving excellence requires a keen sense of awareness of all the subtleties involved.  REX Defense provides a system of instruction that brings marksmanship to the next level of performance through a true understanding of how all the aspects of the craft interrelate.  Common training methods take marksmen through a linear journey of standardized procedures, the details of which are necessarily reduced to the lowest common denominator.  REX Defense takes marksmen on a dynamic journey, exploring the multi-dimensional nature of the craft they seek to master.

"The art of the rifle is universal, but the mode of capturing its perfection is infinitely dynamic." ~ Rex Tibor

An over-dependency on unit level support to troubleshoot and diagnose problems in the field is emblematic of a novice long range operator.  Rex Defense unlocks the operator’s capacity to conduct intelligent self-evaluation of many common problems that arise in the real world.  By delivering key concepts in the science of precision rifle dynamics, REX Defense equips long range rifle operators with the irreplaceable skillset of a dramatically increased level of technical competency that will enable a shooter to remain truly autonomous for long periods of time.  A REX Defense trained shooter will be truly viable, equipped to solve and remedy their own problems as they arise in the field.

"The capacity to operate truly independently without the need of continuous support is an intrinsically paramount quality of a tier-1 long range precision shooter." ~ Rex Tibor

Calculating complex firing solutions in rugged or dangerous field conditions can offer incredible challenges.  Many firing systems demand the use of sophisticated methods of ballistic calculation and data organization.  Navigating these systems while under the effects of adrenaline, stress and fatigue drastically reduces the shooter’s mental acuity at the moment they need to make quick decisions and calculations. Processes that once seemed easy to navigate in friendly training environments can become very difficult to complete in real-world field conditions.  REX Defense offers solutions to these problems.  By equipping long range shooters with competencies designed to remain operable under hasty field conditions, they will have fail-safe mechanisms on which to fall back to calculate precise firing solutions in a diversity of field environments.

Growing up in the midst of the rugged western American ranching culture, Rex’s experience as a rifle marksman began when he was four years-old.   By the time he reached 10-years of age, he had expended multiple thousands of rounds of ammunition under the close supervision of his father, a US Armed Services veteran and hunter, who is an extremely proficient marksman of his own.  Precision-shooting and handgun proficiency was a skill Rex continued to develop throughout his teen years.

At 16-years old, Rex began work assisting in scientific research for a local university; he also moonlighted as a rock musician on weekends.   It was Rex’s early enthusiasm for exercising the Scientific Method – as well as expressing his showmanship skills as a performing musician – that equipped him with the skill set needed to effectively communicate detailed intricacies of various complex topics (including long-range shooting) to others.  After completing his secondary-education, Rex began his lifelong adventure to pursue and master his skills both formally and informally in various capacities. 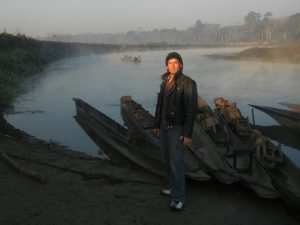 Over the years, Rex has gained experience working with many professionals in the field where he was able to greatly expand his various skill sets even further.  Travelling the world, Rex has had the opportunity observe shooting methodologies from a variety of people in a multitude of environments and cultures.   Rex loves to learn and has collected experiences of other accomplished professional shooters and instructors worldwide.

Rex is also appreciative of his formal education in the Natural Sciences.  Rex’s achievements in conducting scientific research, publishing scientific journal articles, as well as his professional scientific and engineering-related work experience has equipped him to more thoroughly and logically articulate the dynamics of long-range precision-rifle marksmanship in his dynamic training series.